TrainWeb's Grand opening and 10'th Aniversery in La Plata, MO. I went to the RailReatuarnt at around 4:30pm, The Rail dosnt open untell 5:00, So I waited at the tables out side with my Bagage for awhile, while I was waiting other people from trainweb's travel meet stared showing up. At 5 when the Resteraunt opened, every one went in to take a seat and more people started to show up.

The Mini 10th anversery celbration at The Rail lasted to around 7:05, then me my Dad and every one who was scheduled to leave on the the first Train started to get there things and head out to the platform for the Train to come. The small celebration at The Rail was good, and now it was time to go to La Plata!

When I got on the train, I noticed our train had an un refurbished Sightseer car, So I went to go see how it looked in side, the train was ready to go, and so I went back to my seat, I decied to wait tell later to come back for a picture since there were to many people there.

When we got close to Kingsman, AZ, I went back to the Sightseer Lounge to get something to eat and wait tell other passengers had cleared out so I could take a photo:

After that we pulled in to Kingsman.

It was a smooth ride all the way from L.A. to around Flagstaff, after that it got a little bumpy, I wanted to get out and take a picture, but I missed the stop when I was ordering a drink in the lounge, so I decided to get that stop on the way back. The next stop was Flagstaff, AZ

I stayed up and spent most of the first day of the trip in the lounge, I didnt sleep so I just stayed up and took a few photos and waited for morning.

In the morning, our first daylight stop was Winslow, not to long after Sunrise.

There were alot of scenery around Winslow.

After enjoying the scenery we went to breakfast.

Later that day we pulled into Albuquerque, NM. I got off the train and went out to go look around and see the station.

When I got off, I noticed our train was a little differant than what the SouthWestChief usualy looked like, we only had 2 engines and we were short 1 Transition Sleeper, thats wear the crew sleeps. I wonderd around a little more and noticed headlights in the distance, it was The NewMexico Railruner!, it was about to pull in right next to the Cheif!

The Railrunner made a stop for a few minutes, than it went back in the direction it came from, after that it was time to get back onboard and go, I did want to half to try and make it all the way back to the Coach cars at the rear of the Train, so I boarded at the first Sleeper.

When I got on board I ran into Carl Morisson and Andy, they were comparing the new bedrooms against the old bedrooms, they showed me the rooms they had, Andy had one of the newly rufurbished Bedrooms. 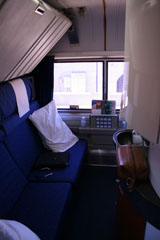 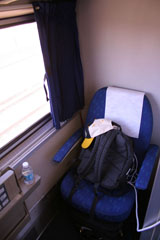 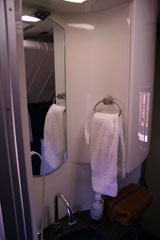 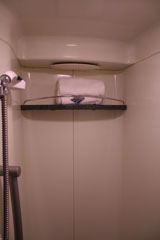 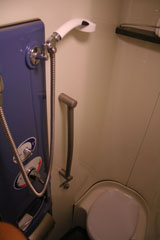 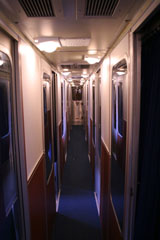 Carl had the origanal room but with the new seat Material 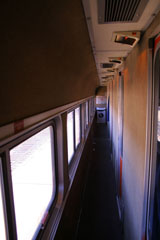 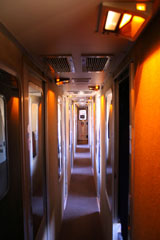 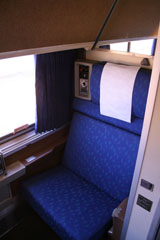 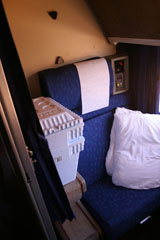 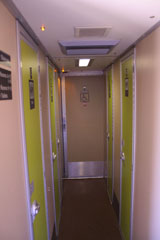 Next stop was Lamy.

There was lots of scenery around Lamy

It started to get dark after that, so I went back to my seat after awhile. 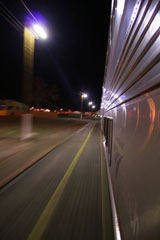 The Next morning we were in Kansas City,MO, It was a long wait at the Station, we started to pull out, then there was an announcement from the Dinner say they didnt get any water, but we didnt stop, so a few miles down the track we had to stop and wait for a while, then we backed all the way up to The Station and got water for the dinning car.

After we got going again, I went back to the sight seer to take some pictures of Kansas City as it when by:

Only a few stops after Kansas City we were getting near La Plata! So I went down stairs with my Dad and the conductor and waited for the train to stop.

When the Train stoped, we got out and seen only very few people on the Platform, The Train had maid a 3 point stop instead of a 2 point stop, so everyone who was going to the ribbon cutting had gotten off, and had loaded into the vans that were taking them to the hotel, I notice tell after the trip that in my pictures of our train leaving you can see the 2 van pulling away

I stayed to see the train leave, before going into the station to find out were everyone went. 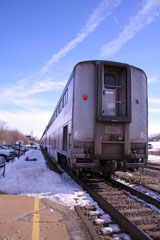 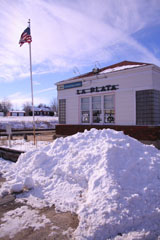 I asked wear everyone was and the person in the station told me they had left! So he said he'd call the hotel and let them know, and in less than a minute, Ray Burns showed up to give us a lift to the depot Inn.

When we arrived we went in and met up with every one who had come off the same train, and see the Depot Inn in person for the first time.

After saying hello to everyone, we went to the Rialroad bridge where the tracks used to go over, but it was not there anymore. 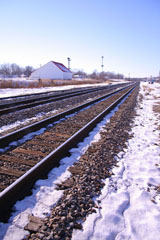 After that we went back to the Depot Inn

After that, we all went to see Trainweb's new Building! 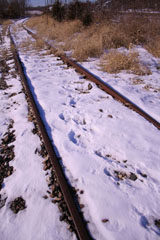 And get a small tour of the inside 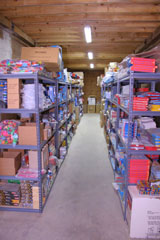 After that, every one went to the Red Rooster to eat at around 7.

Then when everyone was done eating we went to the train Station to see the SouthWstChief #3 come in. While waiting for the train to come in, we seen 2 Frieght trains before the Chief.

After seeing the chief, we all went back to the hotel.

After everyone from the second train had gotten to back to the hotel, it was time to go to the New Trainweb building wear the celebration began. I went inside for a bit, everyone was still getting ready, and some people were still being shown the new building for the first time, so I went back outside and looked around, I ran into Chris Haynes and Chris Guenzler, they were out side one taking a photo of the building and one waiting for a train. 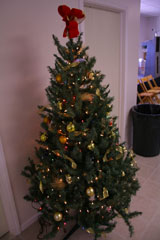 I went back in side when the ceramony began, every one took a seat and looked at the speakers, Richard Hamilton said that the Lets Talk Train Radio show was about to go on the air and for every one to say All Aboard!, and every one did!

After that was the Ribbon cutting!

Then we listend to the speakers at the podeum

After the Ribbon cutting, I went to explore the town with Chris Parker and Chris Guenzler. There were lots of Omish Buggys parked in the center of town, so we stoped to get off for a picture

After that we returned to TrainWeb.

Me, Chris Guenzler, Chris Parker, Carl Morisson, and Richard Egenson all went to an Omish store, I buaght some Deer skin gloves, after that we went to go watch a train go by. On the way there we seen some buggys go by.

Next we stoped at a field were the Omish had made bundles of hay. And discoverd some road kill

Then we went back to the crossing to see another train

Then we all went to Kirksville to fine remains of the old Wabash Line, all that remained was 2 grain elevators and a Railroad brisge.

We also went to the il Spazio Bar

After some drinks we went back to The Depot Inn, soon after that, we went to the Red Rooster restuant to eat 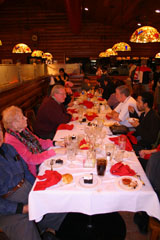 After the meal it was time for the people from the second train to go home, they were only staying for the day of the celebration, so every one went to the La Plata Train station to say bye and watch them leave, There were many Frieght trains for the group to see while awaiting the SouthWestChief.

When the group from train 2 left, every one from the first train stayed to see the train leave and see the frieght trains pass then went back to the hotel while some stayed to see more trains

The last thing before going to bed was The news showing Trainweb on tv, and anouncing there new property in La Plata.

The next day, Ray Burns of Trainweb took us to see an old abandone Train Depot, The Gilford Train Station, part of the SOO line, we went in to have a look and Ray showed us some of the old Hobo Markings 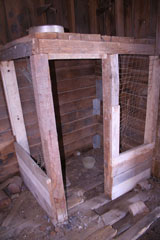 On the way back, we spotted Steve Grande driving right by us, some waved but he didnt see us, we all went out toward Kirksville to see some houseing but didnt get to see them, so we returned to the Depot Inn, later on we would board the Train to go home.

At night time it was geting close to when it was time to go, so we got our stuff and headed for the station to wait for the train, I took a few last shots of the Station.

I borded The train when it arived, and me, My Dad , and every one on the first train on the way up were on thair way home. In Kansas City, MO, There was a Train in the nearby yard that had a giant Pipe section on it, its kinda hard to see

The next Day coming back threw Lamy, I got a chance to see all the scenery again, and some wildlife

Before coming in to Lamy, we got delayed by a brokendown frieght train with an air problem, we were there for about to hours, so I went down stairs, two passengers had open the down stairs window, so I took a few photos out the window 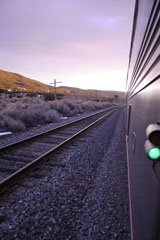 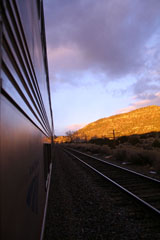 After the problem was taken care of, we continued to wait for Train #4 to pass, it went by a BNSF truck went by to

I went to dinner in the diner after it got dark and ate, then went to the lounge to take pictures since no one was in there and I could set up my Tripod. We had a Newly Refurbished sightseer with tables installed, so I went to go see that first, then to go get my equipment. I also went along to other places on the train to take some pictures 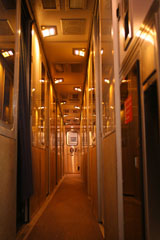 Next we stoped in San Beradino

Then, we were on to our last stop, Fullerton California!

We were back!, a good trip, and now we were home, every one got off and Steve Grande met us all on the platform, ever one said bye to each other and then left for home, The End.