LOS ANGELES, Oct. 1, 2018 /PRNewswire/ -- With a blast of the locomotive's horn and a shower of biodegradable confetti, the Los Angeles – San Diego – San Luis Obispo (LOSSAN) Rail Corridor Agency and the California Department of Transportation (Caltrans) introduced new, cleaner locomotives to the Amtrak Pacific Surfliner service today at Los Angeles Union Station. State and local officials in attendance had an opportunity to step aboard one of 14 new Charger locomotives that will begin operating starting this fall. The Charger locomotives, manufactured by Siemens, will power the next generation of Pacific Surfliner trains between San Diego, Los Angeles and San Luis Obispo. "The production and delivery of new locomotives and railcars does more than provide an environmentally-friendly way to travel around the state," said Brian Annis, Secretary of the California State Transportation Agency (CalSTA). "It also directly employs more Californians in well-paid jobs, while indirectly generating more jobs throughout the state's economy." The Charger is the first passenger locomotive to receive the stringent Tier IV emissions certification from the Environmental Protection Agency, making the Charger one of the cleanest diesel-electric passenger locomotives currently in operation. California is leading the charge and is at the forefront of low-emission rail vehicles. "These locomotives were proudly produced by the 1,300 Siemens employees who work in our solar-powered plant in Sacramento, California, one of the most well-established, comprehensive manufacturing facilities of its kind in the country," said Michael Cahill, president of Siemens Rolling Stock in the U.S.  "Siemens is grateful for the opportunity to work with Caltrans and is proud to be a part of their efforts to provide clean and efficient transportation for the state of California." The 14 locomotives were funded by Caltrans with approximately $100 million in state, federal and local funds, and will replace Amtrak-owned locomotives which are nearly 20 years old. "I'm excited for these new locomotives, which will provide safe, clean and reliable passenger rail service in Southern California," said Caltrans Director Laurie Berman. "I'm very proud of partnerships like this – working together helps Caltrans do more for the mobility of Californians." With 24 daily trains providing service along the Southern California coast, the Pacific Surfliner offers an attractive and environmentally-friendly transportation alternative that helps relieve congestion on adjacent freeways like Interstate 5 and U.S. 101. "The Charger locomotives are almost 90 percent cleaner than the locomotives they will be replacing, and their 4,400 horsepower engines are more powerful and reliable too," said Bryan MacDonald, chairman of the LOSSAN Agency, which oversees the Pacific Surfliner service. "These locomotives will allow us to expand Pacific Surfliner service to meet growing ridership demand while also significantly reducing emissions in the communities we serve."


Fact Sheets from Siemens about the Charger

(Double-Click any fact sheet for a double-size copy; Click BACK in your browser to return to this page.)

The event started in a tent with seating and refreahments adjacent to the Charger.

Countdown to the locomotive's bell and a shower of confetti.

Michael Litschi, LOSSAN Agency, prepares to come in with a cutter.

Half of the audience

Catered by Joan's On Third

(Images with a narrow blue border can be clicked for a larger image;  click BACK in your browser to return to this page.)

The left position has a screen that duplicates the operator's screen on the right.

In the back of the Charger are two orange boxes (not pictured) which are the first to be recovered after a crash, similar to black boxes on an commercial aircraft.

"X marks the spot" This is how I tell a Charger from an EMD, from the outside I look for the X of the Charger.

I guess they will need a new banner with a Charger like this one taken on a bridge near the Del Mar Fairgrounds.

Upstairs in the Business Class car, with free schedules which my station, FUL, doesn't hand out any more.

Only one of the two doors on a Surfliner car will have the handicapped blue sign on the door.

One of the two doors on a Surfliner car will have this ramp for wheelchairs and scooters.  Look for the handicapped blue sign on the door that has it.

I had the attendant get the ramp out and take this photo to show how it works.  However, at a platform, the angle is not as severe.  The ramp is only put out when needed.  In my case, I just lift my scooter from the platform into the car.

Once onboard the Surfliner car, nearby will be a missing seat where the scooter, or a wheelchair, can fit perfectly.

Hard to believe we have seen these F59s on the Surfliners since 1998!  They are being replaced by the new Chargers which were unveiled today.

I asked Michael Litschi <mlitschi@octa.net> how many Chargers will eventually be delivered and what the fate of the existing F59 locomotives would be.


There are currently 7 Charger locomotives in Los Angeles, and we expect another 7 to arrive before the end of the year, for a total of 14.

Each Charger locomotive will have a “burn-in” period during which it will operate as the second unit behind another locomotive.  The burn-in testing is expected to begin this month.


Thank you Michael for the quick and complete response.

Los Angeles Union Station is a favorite place to view trains that service the area. The best way to view the 14 tracks of activity is to take a train to Union Station and when you arrive, instead of hurrying into the station, walk to the south end of the stub-in tracks and look west toward the station and east toward the Metro building to see the locomotives. Your ticket is your permission to be on the platform.

A new Metrolink No. 912 by EMD happened to be on a nearby track.

Metro light rail will be the nearest tracks to the station.

The historic station itself provides many opportunities for photos.

Directly opposite of this Ticket Entrance, two night later, was an exclusive previw of the new Imperial Western Beer Co. and The Streamliner put on by the Los Angeles Conservancy from 6 to 9 p.m.

If the video above does not work, Click the link below for a video of the route:


Surfliner Facebook Page, with photos from the same unveiling plus earlier photos and reports:  https://www.facebook.com/PacificSurfliner/


A different nose configeration of the Charger can be seen on the Brightline in Florida: 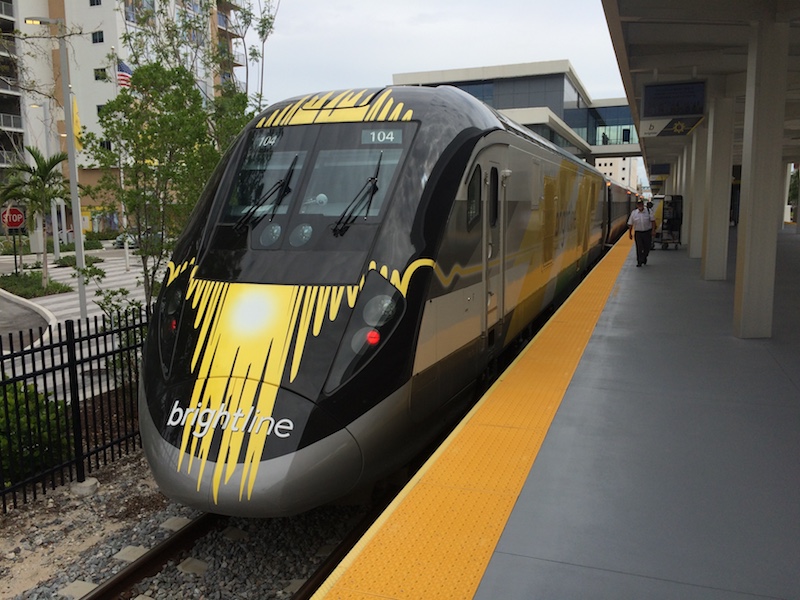