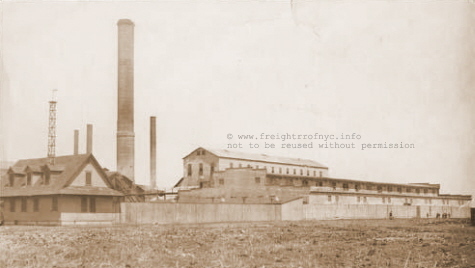 In the days when coal fired furnaces were the norm for heating homes and businesses, ash dumps were an unavoidable feature of the city. The City of New York, would contract with private removal firms to haul away the cinders and ash. One of these companies, the Brooklyn Ash Removal Co.; was organized in the late 1800's by William Reynolds.

The following map from the United States Geological Survey, dated 1897; shows the Barren Island vicinity, prior to the dumping of the ash. This map was courteously submitted by Harry Rado: 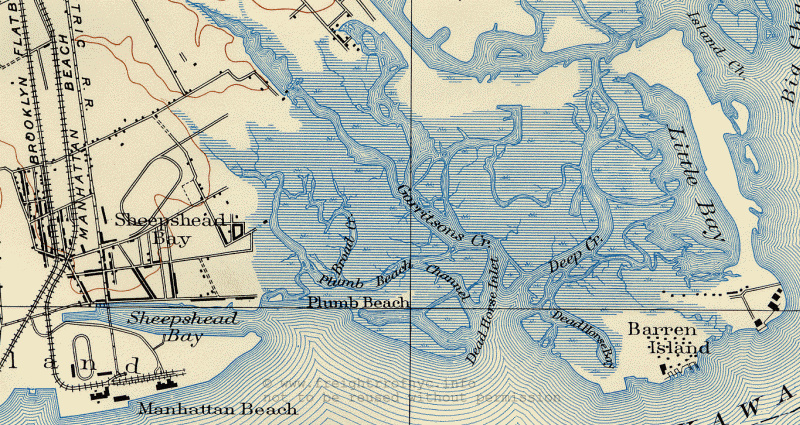 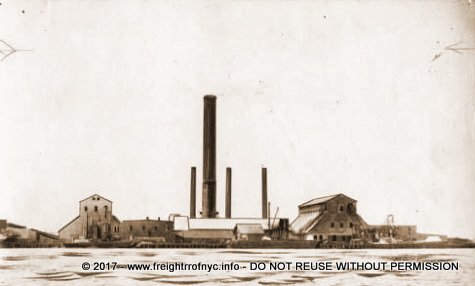 In 1904, the Brooklyn Ash Removal Co. received the New York City contract for ash removal, and used this coal ash as well as the ash produced from their on-site incineration of dry garbage to fill in marshlands and tributaries of Barren Island in Jamaica Bay. This area is now home to Floyd Bennet Field, as well as several marinas.

At this time, it is not believed that Brooklyn Ash Removal operated a railroad at this location.

The March 10, 1907 issue of New York Times carried an article explaining the method of hauling the ashes to the landfill:

The incinerators and adjoining buildings that had been constructed at Barren Island would be demolished in 1939, to make way for the construction of the Belt Parkway.

In 1909, after the Barren Island land area was maximized to it's limits, Brooklyn Ash Removal would relocate to and went on to operate what was known as the Corona Dump. Again, what Brooklyn Ash had done for Barren Island, through the continued dumping of ash from both coal furnaces and incinerated dry refuse that Brooklyn Ash was producing, eventually turned the Corona salt marshes into landfill.

In 1918, the Brooklyn Ash Removal Co. re-incorporated after merging with the Flushing Bay Improvement Co., a general contracting and ash removal firm. Records show it was located at 186 Remsen Street.

By the 1920s, the 1,200-acre Flushing Meadows had been turned into a gigantic ash dump. The smoking ash pile by some accounts was over 90 feet tall, and was known as "Mount Corona". F. Scott Fitzgerald, on his train ride between Manhattan and Long Island; described the scene in his 1925 novel "The Great Gatsby":

"a valley of ashes . . . bounded on one side by a small foul river . . .
a fantastic farm where ashes grow like wheat into ridges and hills and grotesque gardens."

As coal use had increased during the 19th century; the existing wetlands, as well as the creek that flowed from Flushing Bay, were filled in to facilitate the site's use as a dump. But a member of the corrupt Tammany Hall regime, John "Fishhooks" McCarthy; was given sole use of the grounds and as a result became involved with Brooklyn Ash Removal. At one point, the Brooklyn Ash Removal Company was unloading over 100 railroad carloads of garbage a day to be burned and disposed.

The Corona Golf Course was also laid out on top of the dump, and there was a white colonial styled structure that served as a clubhouse. The Corona Golf Course was the brainchild of Colonel G. R. Van Etten, president of the Brooklyn Ash Removal Co. and the golf course lasted from 1931 to 1934, at which time the City of New York purchased the property from the company.

The Brooklyn Ash Removal Co. "railroad" crossed it, and golfer's play would be halted by flatcars full of refuse destined for the newer part of the dump to be disposed of. Once a day the road-bed had to be sprinkled with antiseptic, to prevent infection of sportsmen.

Around 1934, the city put an end to the private ash dumping contracts, sounding the end of the Brooklyn Ash Co. and the City of New York purchased the Corona Dump for the growing Parks Department on May 25, 1934. Also at that time, Robert Moses was building the Triborough Bridge and to connect to it; he constructed the Grand Central Parkway. The rest of the area he envisioned as parkland, but in the 1930's, funding were scarce. Moses staged the 1939 and 1964 World's Fairs on this site and both contributed to the intensively used 1,255-acre park of today.

As far as is known, all the trackage owned and operated by Brooklyn Ash Removal, was located in the dump at Corona.

While it is not confirmed, it is highly likely that these tracks within the dumps were semi-temporary, and would moved when a particular area of the dump had reached capacity or needed access.

These sidings would serve as "dumping stations", where horse drawn carts, gondola trolleys and eventually internal combustion trucks would bring the ash that was collected from the homes and businesses surrounding the siding locations.

The original unaltered versions of these maps, which are from the Dave Keller archives, can be found on the Bay Ridge page of Steve Lynch's Long Island Rail Road history website www.trainsarefun.com. The maps shown below, have been clarified for ease of viewing.

To date (December 2009), I have been able to identify five locations in Brooklyn that held sidings of the Brooklyn Ash Removal Company:

The westernmost siding was located in Bay Ridge between Sixth and Seventh Avenues: 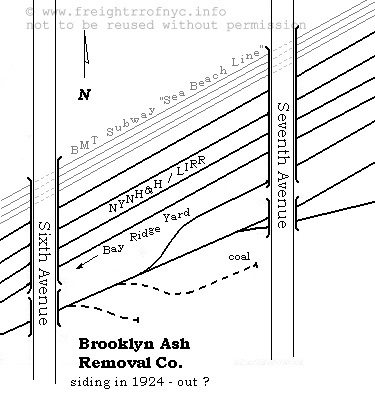 The next location east, was located at NYNH&H / LIRR Bath Junction Team Yard, at Sixteenth Avenue: 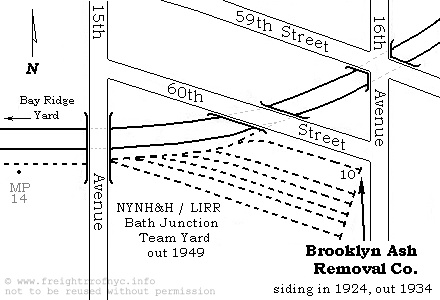 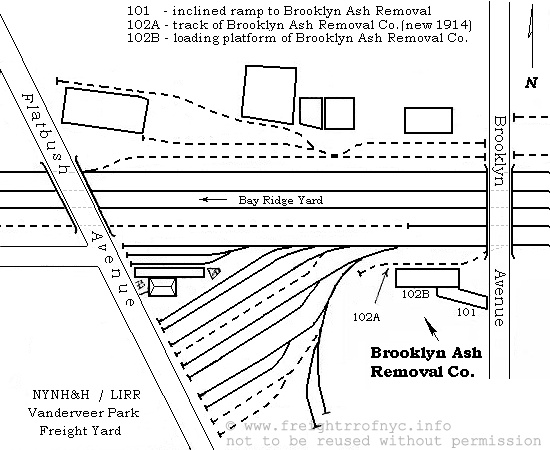 The fourth siding of the Brooklyn Ash Removal Company was in East New York just north of the Blake Avenue Yard. It was located between Blake and Sutter Avenues, between Vesta (now Van Sinderen) Avenue and Junius Street. 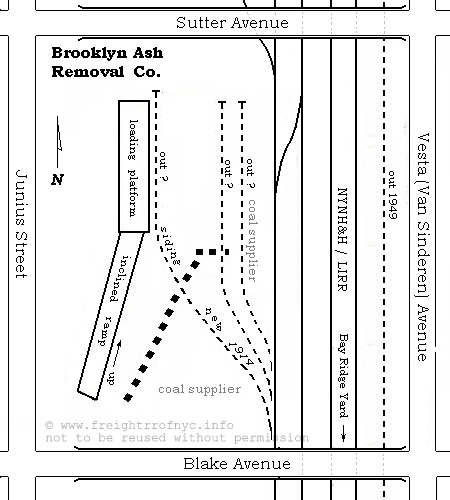 The fifth siding of the Brooklyn Ash Removal Company was located along Meserole Street in Bushwick, a neighborhood in northern Brooklyn. Rail access for this location was by way of the Bushwich Branch of the Long Island Rail Road. 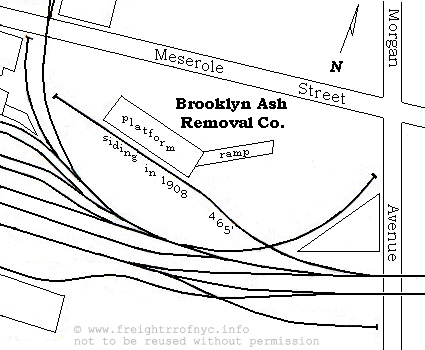 To date, only three locomotives were known to have been purchased and operated by Brooklyn Ash Removal Company. Referencing the dates of build for these three locomotives, all would have been used at the Corona location, as Barren Island had been closed by the first locomotive build date.

As of 11 February 2010, Paul Strubeck located the following image in the New York University Faculty Digital Archives - New York Department of Sanitation Museum Project. While the photo is undated, it presumably had to have been taken between 1920 (the year the first loco was built) and 1934 (the year the Corona Dump closed). The caption for the photo reads:

"Black and white photograph of the landfilling process. Waste was brought to the site by rail. Sanitation workers are posing." 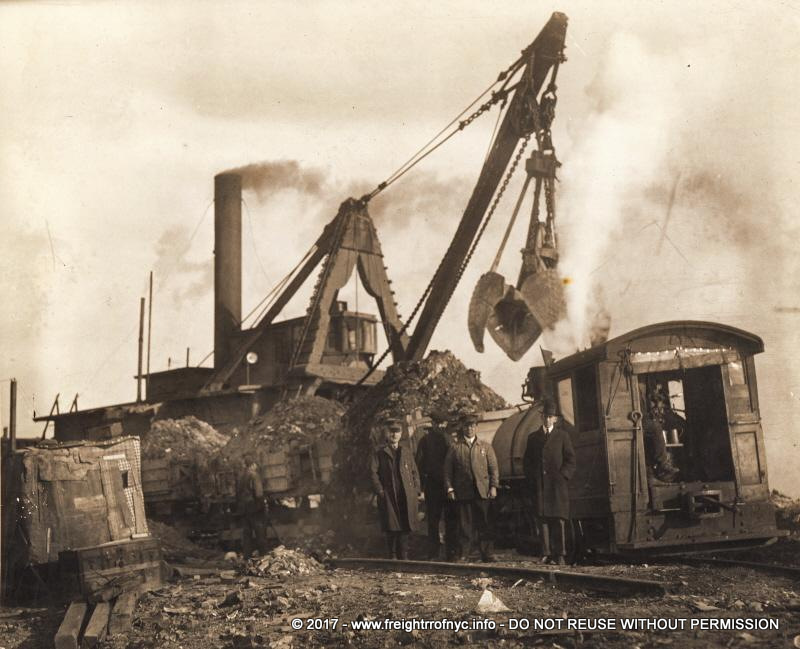 
Rolling stock consisted of a fleet of wood sided ash gondolas. It is not known if these were a manufactured model or custom built for Brooklyn Ash Removal.

“One of the most unusual trains regularly operated on the Long Island Rail Road was the ‘Talcum Powder Express.’ These trains hauled furnace ashes collected at curbside by the Department of Street Cleaning at a time when almost everybody in Brooklyn heated their homes by coal. Trucks with solid rubber tires rumbled off to the railroad sidings where they were dumped into high-sided wooden gondola cars belonging to the Brooklyn Ash Removal Company.

These cars, numbered 1000 to 1100, were forty feet in length and held ninety cubic yards of ash. A railroad crew made two round trips a day between Bay Ridge and the dumping grounds in the swamps of Flushing Meadows, future site of two World’s Fairs. In spite of an ordinance that required each car to be covered by a tarpaulin before making the trip, a cloud of white dust always filled the air as the runs were made. Until discontinued in 1934, these trains became popularly known as the ‘Talcum Powder Express."

From what this author has now been able to discern, the Long Island Rail Road was contracted to transport the ash cars from the various sidings in Brooklyn along the Bay Ridge Branch and transported to the Flushing Meadows / Corona Dump.

Please note, that the three Davenport locomotives as listed below, were not used for actually transporting the ash cars through Brooklyn to the Corona Dump and they were only used to haul and switch the dump cars once at the Corona dumps.

In the photo below, you will see one of Brooklyn Ash Removal Co's ash gondolas. 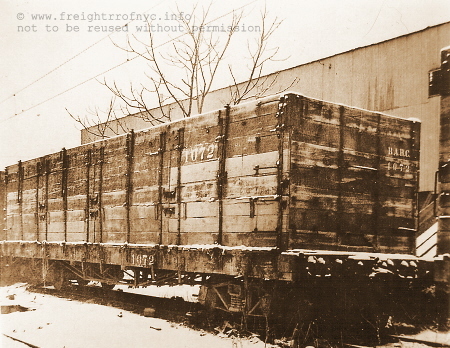 According to a submission from Stephen Meyers, during the Corona Dump phase of operations, ash was also transported to the Corona Dump by a fleet of double trucked electrified street railway gondolas operated by Brooklyn Rapid Transit. I am almost certain these overhead electric gondola cars are similar in design and configuration to cars 9161 or 9980 of the South Brooklyn Railway (see photos on the South Brooklyn Railway page)..