Ok, ok... so Fort Terry isn't really in the NY Metropolitan area. But Fort Terry had a railroad, it was on Long Island, and it had a locomotive (which was a Porter) and that's good enough for me to list in this website!

Fort Terry was located on Plum Island, which is off the north shore of Long Island just east of Orient Point and about 12 miles southwest of New London, CT. When the island was first purchased, it was the site of a lighthouse station, which is now a historical landmark.

Ft. Terry itself was founded in 1899, and was another Coastal Defense Station. It was heavily fortified with a large array of cannon and mortar for defense during the Spanish-American War. Several extensive websites on the web, cover the military history of Ft. Terry, but at this time; nothing is known about the railroad on Plum Island. One possible and most likely scenario is like the other Fort Railways: it had built to haul munitions from bunkers to the artillery batteries. 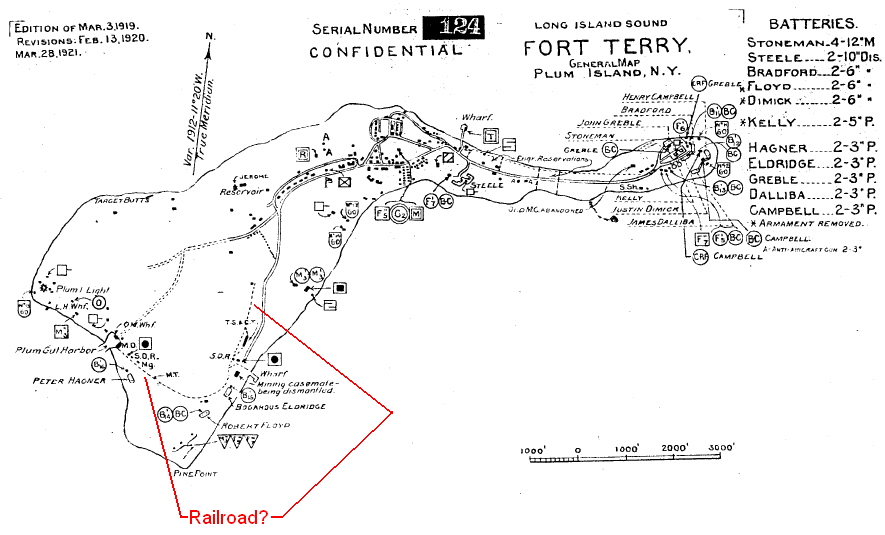 annotated image © 2019 ~ www.militaryrrofnyc.info
maps from the website of the
Coastal Defense Study Group
originals reside in the National Archives.
The legend for symbols used on the above map be viewed here: 1920 Series Confidential Maps Symbols & Abbreviations.
added 14 May 2019

Making "on site" research difficult, is that in 1954 the island's ownership was transferred to the Department of Agriculture, which now use a portion of the island as a animal disease research facility. Many parts of the island, if not the entire island itself were/are quarantined and obtaining access to the island is difficult to say the least.

We know Fort Terry had a railroad. However, several references fail to show the track layout for this railway.

The following maps were located on the web by Joe Roborecky within the website of the Coast Defense Study Group. The last revision date on all maps below is September 15, 1921.

Unfortunately, trackage is not denoted. However, there is a dotted line shown on both the General Map above and map D3 below that could be interpreted as trackage. I have denoted this dotted line with red footnotes on the map. 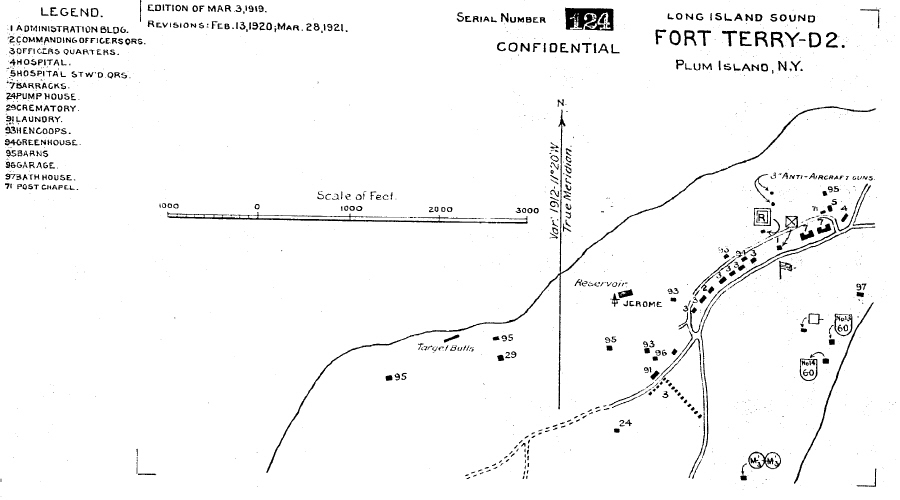 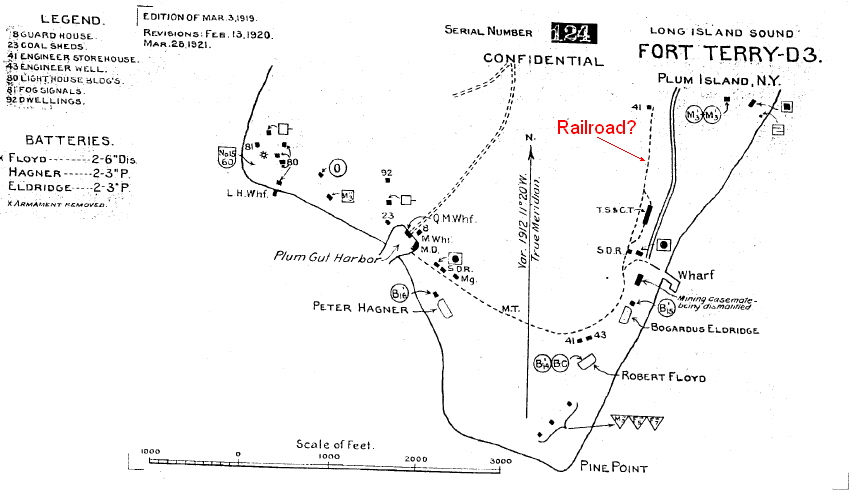 March 28, 1921
maps from the website of the
Coastal Defense Study Group
originals reside in the National Archives.
added 10 January 2011

Below are photos of the locomotives that are known to have operated at Fort Terry.

The appearance and style of these locomotives are representative of the other Fort Railways: a small 0-4-0 saddletank type switcher. The wheelbase was short enough for the tightest radius curves, and the dimunitive size of the locomotive allowed for simple operation. .

On 30 December 2010, I received an email from Pierce Rafferty, Director of the Henry L. Ferguson Museum on Fishers Island, NY:

I was recently directed to your website by a visitor to the Henry L. Ferguson Museum on Fishers Island, the site of the former coast artillery fort H. G. Wright.

He was interested in the use of steam engines at Fort Wright and I told him that although there is evidence on military maps of track, I have never found images of engines in use. When he directed me to your site to see the image of an engine at Fort Terry, I realized that you would be interested in the attached image of a steam engine at the dock at Ft. Terry in 1898.

I ordered it years ago from the National Archives (no. RG 77-CA-70C ) while doing research on the island forts for my history of Ft. H. G. Wright "Guardian of the Sound".

As the image is in the public domain, you can do with it as you like. If you post it, credit NARA, with a thank you to the Henry L. Ferguson Museum if space permits.

In the large photo above, it is obvious construction material is being offloaded, construction is in progress on the island and the jetty / wharf was quite recently constructed.

Upon brief examination, this is a completely different locomotive than in the Plum Island #5273 locomotive photo at the top of the page (which was not constructed until 1914).

I have noted are the following differences between the locomotives:

So there no doubt this locomotive is different from the #5273 locomotive. Unfortunately the angle of the photo precludes us from determining the road number of the locomotive which appears to be either "30" or "80" or the construction number on the builders plate.

Of particular note is lettering on the cab "US Engineer Department" which at the least identifies the owner of the locomotive and the rather clean & shiny appearance of the cab & saddletank, infers this locomotive to be of rather recent construction.

Therefore, in consideration of:
.

It is concluded that the locomotive in the photo immediately above; was used in the construction of Fort Terry, and is not the same locomotive attributed in the roster for Fort Terry below.

Taking into consideration what the island was, and continues to be used for (Animal Disease Research) and the islands nickname is "Anthrax Island"; I am not so sure I should (or want to) attempt to request access for research , especially considering this heightened age of paranoia; (not to mention "rootin' around" in the dirt).

The following photo of #5273 below is courtesy of the Plum Island Animal Disease Research Center archives and was the inspiration for this page.. I have, heard through the friend of a friend; that the locomotive is still on the island but buried at an unrecorded location. I have not been able to confirm this local legend at this time.. 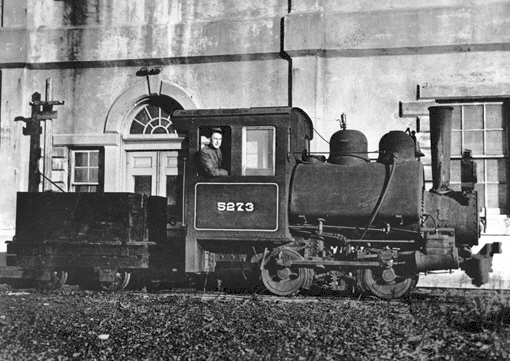 I was able to locate an undated (ca. 1956) publication of the newly open facilities of the US Department of Agriculture's Animal Disease Research Center on Plum Island (in the online archives of the University of North Texas archives: http://digital.library.unt.edu/ark:/67531/metadc1577/m1/1/).

This publication explains the transportation methods in bringing the animals onto and around the island. No railroad is mentioned. This pamphlet can be viewed and read in it's entirety in the online archives of the University of North Texas archives at: http://digital.library.unt.edu/ark:/67531/metadc1577/m1/1/.

Therefore based on the lack of mention of a rail operation in this publication, it is believed that the railroad operation at Fort Terry existed only from the time of the initial construction through its closure following in World War 2. Furthermore, it is not believed the railroad still existed at the time of the transfer of Plum Island to the auspices of the US Army Chemical Corps in 1952 nor the subsequent transfer to the US Department of Agriculture 1954,