Special thanks to George Lane for forwarding the images from the National Archives!

The Governors Island Railroad was constructed to service the extensive array of supply warehouses located on Governors Island. When you consider how much materiel the Quartermaster must deal with on a daily basis (not to mention the storage of): uniforms for different seasons, clothing accessories (belts, hats, gloves), weapons accessories (shoulder slings, belt ammunition pouches), mess kits (forks, knives, spoons, meal trays), food (Iron & Reserve Rations - predecessors to C & K rations) canteens, backpacks, gas masks, ponchos, tents, toothbrushes, etc. You name it, and if it wasn't a weapon or a vehicle; it pretty much went through the Quartermaster.

Moving these supplies from government contractor / manufacturer factory to the supply depot is pretty straight forward and as we seen, most military supply depots had rail networks to facilitate movement in receiving, shipping and transfer from one warehouse to another.. That is all simple until that depot is located on an island without a bridge.  Then you need float bridges and carfloat service! But the puprpose of the railroad is the same.

It has been said in many discussions that the Governors Island Railroad consisted of 1 ¾ miles of track, and of which originally had three flat cars carrying coal, machinery and supplies from the pier to shops and warehouses.

After reviewing track maps and photos, I came to the conclusion that the Army expanded the trackage to cover almost the entire length of the island, with many more cars (primarily box cars) that are present in the Fairchild Aerial Survey Photographs below.

However, it also occurred to me after reading an email letter from Steven Delibert (whom I knew casually from his interests in Ulster & Delaware County, NY railroad history and personal friend of my uncle), that original trackage was 8 miles, reduced to 1 ½ miles. Another comment from and unidentified source doubts the eight mile figure.

The following commentary disputes that figure:

So where does this figure of 8 miles come from? Well, I think I have figured it out:

1½ miles multiplied by 3 tracks equals 4½ miles. Factor into this figure the yard stubs AND the spurs in the alleys between the storehouses and tracks in the storehouses, and you would arrive at a figure very close to the 8 miles.

Therefore it is my hypothesis that the concluding figure of 1½ miles of trackage probably denotes the overall length of the layout, not the cumulative amount of trackage laid which might have totaled 8 miles.

In any event, the trackage that can be seen in the 1918 Fairchild Aerial Survey Photograph below (looking southwest) with authors annotations, show a rather modest sized railyard built on the curve to the east leading to a pair of wood Howe Truss floatbridges (very difficult to see in this photo), and what appears to be an enginehouse on the southern tip of the inland.

On 24 May 2010, I received an email from Art Audley who furnished the following items. His emails contained some very interesting images and scans pertaining to both the construction and demolition of the Governors Island Railroad.

The first item, is a map denoting the locations of construction contracts. It is referenced in the documents below as a plot plan. However, it doubles very nicely as a track map! 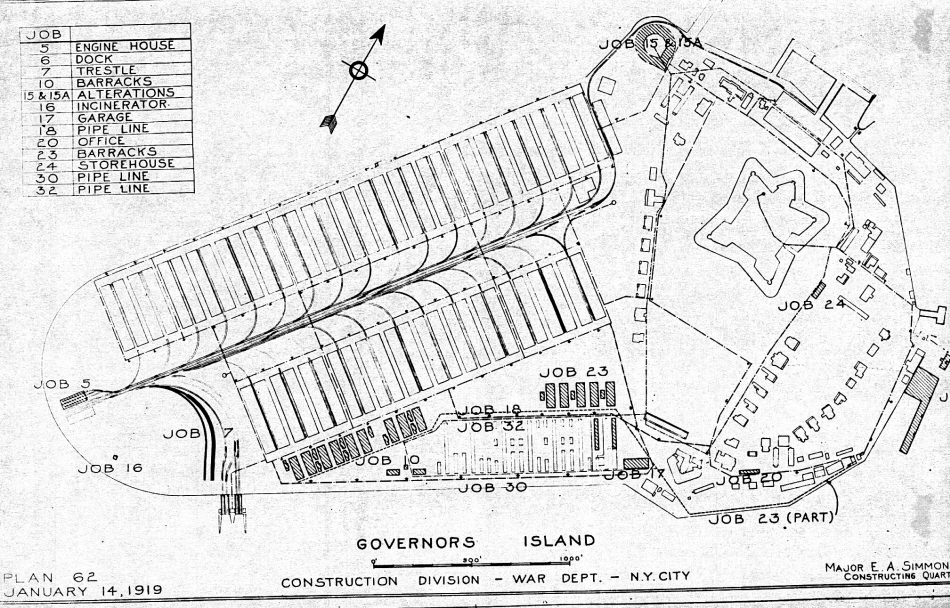 The following, also furnished by Art Audley, appear to be a construction summary by the Constructing Quartermaster, Major E. A. Simmons: 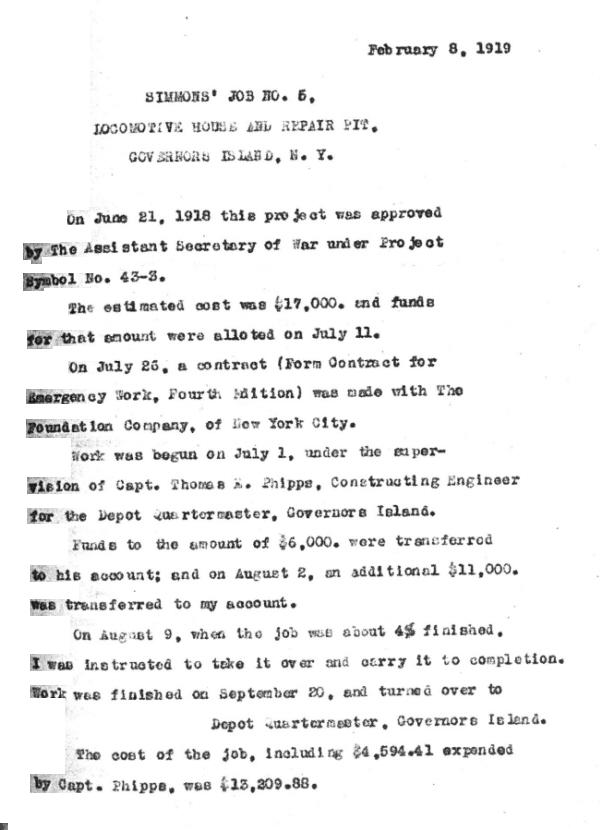 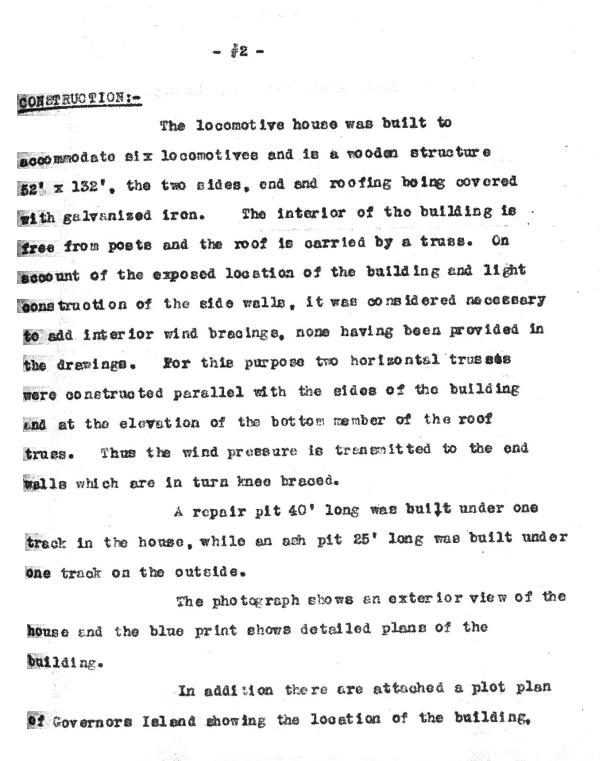 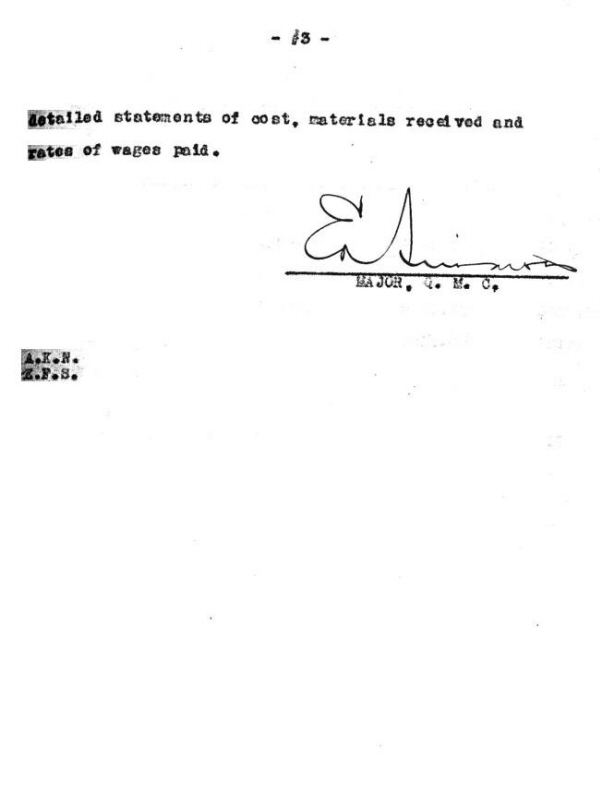 The following is a copy of the photo of the completed enginehouse: 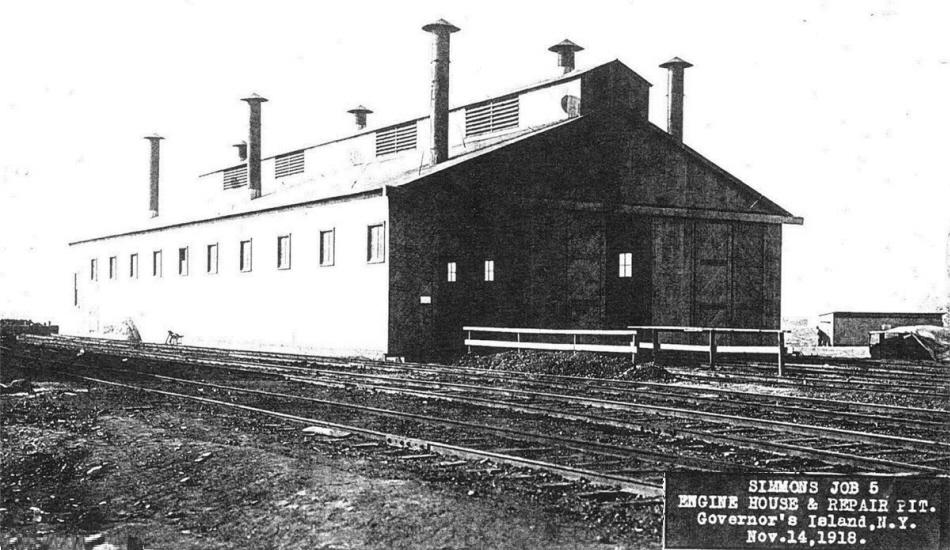 Three tracks heading up roughly the center of the island (running north / south) from the enginehouse, with the outside two tracks splitting off to the east and west and into alleys between the Quartermaster Supply Buildings.

(For your viewing pleasure, there is an non-annotated photo in photo section below.)

In the picture below, taken ca. 1927 (and looking due north) we clearly see in the close up at bottom right; the two Howe Truss float bridges (the southern one already with a sunken pontoon) and the northern float bridge with a carfloat moored.

That carfloat by the way, appears to be a New York Dock carfloat. I believe this to be on several counts:

Unfortunately, any attempts to "zoom" any closer on the photo only pixelates the image worse.

You can see all too well in the regular view (top left) that: all the east side as well as some of the west side Quarter Master Buildings, the enginehouse, and most of the yard trackage has already been removed.

For all intents and purposes this railroad did not last long, likewise other small military base railroads in the New York Metropolitan Area like the US Navys' Fleet Supply Base located in South Brooklyn., which also ordered four locomotives in 1919 and sold them off by 1922.


Now, ascertained from the locomotive pictures below; it is seen that:

Never-the-less; many questions abounded at first, some of which were answered over time.

Extensive research of authors H. K. Porter builders records, reveal numerous locomotive entries for US Army and QMC, but none show conclusively they were assigned to, or operated at Governor's Island.


This author has discovered in the ALCo builders records, four 0-4-0T steam locomotives built by ALCo Schenectady, that fit the numbering sequence and locomotive type that correspondes with the date that the GIRR was built and the fact the locomotives were ordered by the Quartermaster Division. (QMD). I now believe that the locomotives are ALCO products not H. K. Porter, and the roster below has been changed to reflect this. Unfortunately, build specs are not listed, (i.e.: cylinder size, driver diameter).

In the winter of 2017/2018, I received several images from George Lane who had forwarded several images from the National Archives in College Park, MD. Some of these images (of the locomotives) had been seen before in less than stellar quality. But a few were images we had not encountered and were of the infrastructure of the Governors Island Railroad. As these images trickled in and were examined, subtle details began to emerge. Thanks to these images, we know can ascertain that several railroads (and not just one) in New York Harbor provided service to Governors Island. This was ascertained by their carfloats can be seen in the photos taken from the water off the float bridges: New York Central or New York New Haven & Hartford "C41" tied up along the bulkhead and an Erie Railroad "390" at the north float bridge.

The first is the newspaper article from the February 12, 1931 issue of the New York Times concerning the scrapping of the Governors Island Railroad. 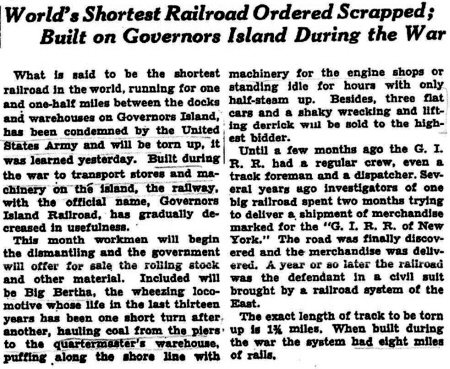 The last item, is a Rogers Map dated 1934, and was located in the Library of Congress. It is my intent to secure a better copy in the future, but we can see that the storehouses in the center of the island have already been demolished, but the railyard, enginehouse and it appears the float bridges are still in place.

Therefore is seems highly probable that the railroad was used to transport demolition material to the yard, possibly the float bridges; to be removed from the island. But, this is not confirmed. 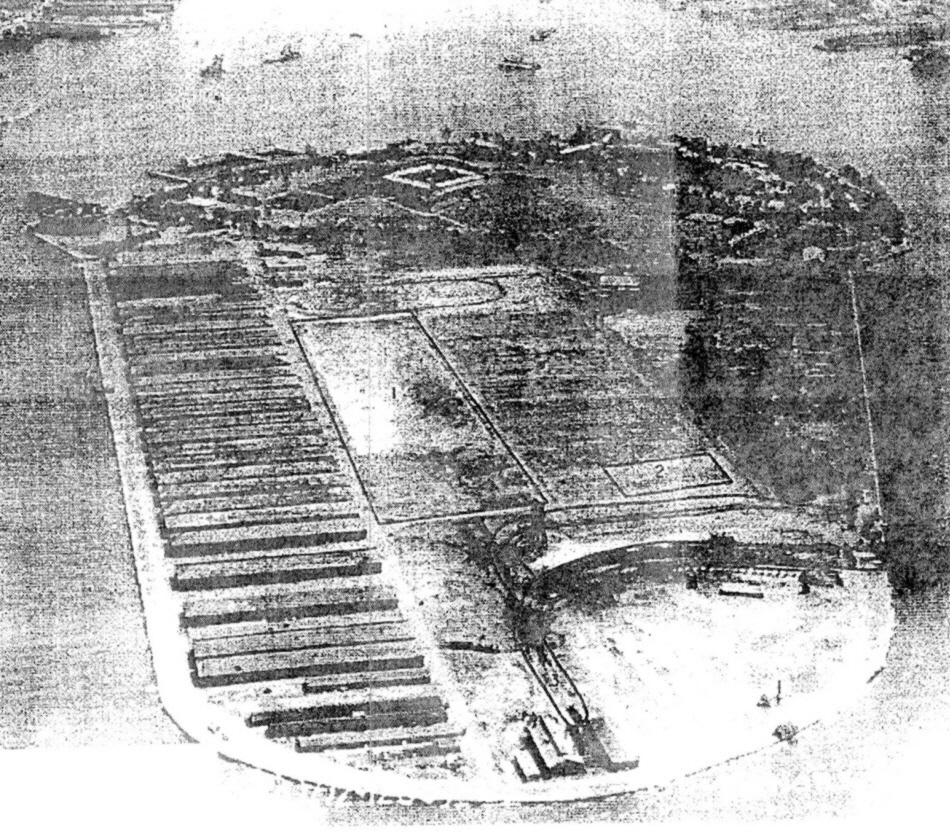